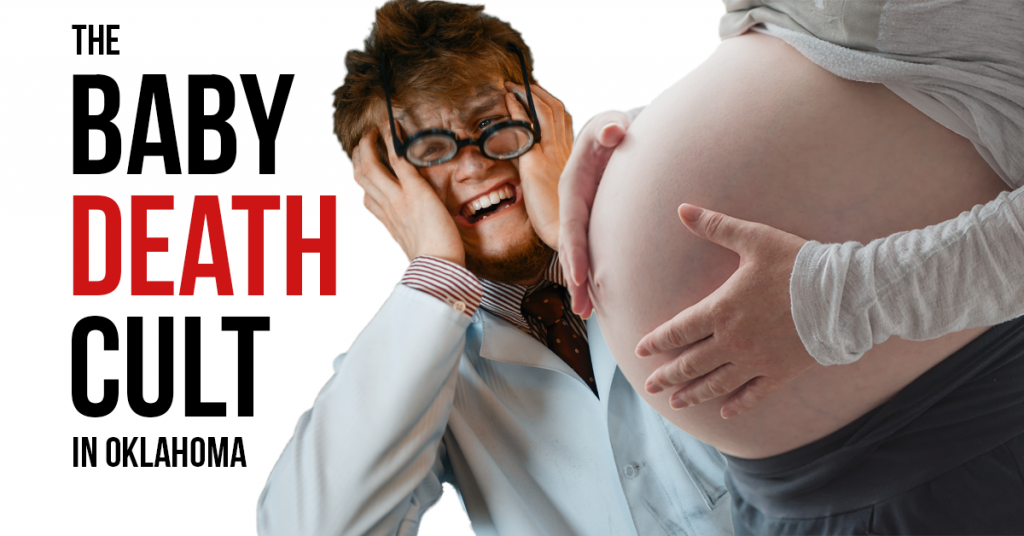 At least, they should. But protecting the lives of children in Oklahoma is a fight which has not been without its challenges. Even here, in the Reddest of states and the Buckle of the “Bible Belt,” there is a powerful army of adults who profit off of a dark gospel which advocates the gruesome slaughter of babies. And they practice what they preach.

They call themselves “Pro-Choice.” I call them what they truly are: The Baby Death Cult.

Anyone even loosely aware of the abortion debate in America is familiar with the Baby Death Cult’s justification for murdering babies. But first, let us revisit the topic of human reproduction—specifically, the chapter on embryogenesis (how babies grow) from your 8th grade science class.

Everybody has genetic stuff. When a dude’s stuff (HIS cells) combines with a gal’s stuff (HER cells), that is called fertilization. At the moment the genetic stuff is combined; that fertilized egg is genetically distinct. It is not a part of the dude, it is not a part of the gal. Yes, the gal will carry it for a while. Yes, the dude will pay for its groceries, toys, clothes, college… at least, he will if he’s any kind of man (unless the mother is a professional breadwinner, which is totally cool and was my game plan in college; but I digress…). But that fertilized egg is alive, and it is a separate human whose DNA will remain unchanged for the rest of its life.

That’s the science. The science is not in question. To deny these irrefutable biological FACTS is to deny science. The real debate is not one of science, but of morality and rights.

Fortunately, as a philosopher and ethicist, your Uncle Daryl specializes in morality and rights. And arguments. So, let us examine the Baby Death Cult’s most popular arguments and see how its wholesale slaughter of innocent, defenseless children is really guided by lies.

“My Body, My Choice.” Baby Death Cultists insist that a woman should be free to do with her body whatever she chooses. This idea, called body autonomy, is a basic human right. The government, they say, has no power to compel a pregnant woman to carry her unborn child to term. It is interesting that many of the Baby Death Cultists who believe in body autonomy when they want to kill babies stop believing in body autonomy when they want to force experimental COVID drugs into unwilling people’s arms or force face masks onto unwilling people’s faces. And by “interesting,” I mean “hypocritical.” Baby Death Cultists’ mantra of body autonomy is a falsely-claimed principle. If this is in doubt then just ask this: What about the baby’s right to choose what happens to its body?

“Rape and Incest.” Rape and incest are highly traumatic, and a pregnancy resultant from such trauma is a potentially painful reminder of that horror. Nobody with even the slightest bit of sympathy could deny this point—and it is just another reason why I believe convicted rapists should be swiftly, savagely, and publicly executed. I also believe that people who make demonstrably false claims of rape should be severely punished, but that is another article altogether. Like all Leftists who rely upon emotional appeals, Baby Death Cult advocates love to play the rape and incest card. The problem is that it just does not generally apply. According to HHS, BLS, and every other available source, cases of rape and incest account for less than 3% of reported abortion procedures.

“This is about Women’s Healthcare.” If we wanted to be pedantic then we could remind abortionists that according to the Left, there is no such thing as gender. Instead, I would harken to the most vehemently pro-abortion institutions’ own studies and reporting, which states only about 6% of abortions are performed because the mother’s health is at risk; that number might be as high as 8% at the top, depending on how loosely we define “risk.” Again, these circumstances should be taken seriously when they are present—but they are still rare. And what about the baby’s health? Does the unborn woman’s health mean anything? It does to me. It should to you. But to the Baby Death Cult, the unborn woman holds no value beyond a revenue source.

Combined with the rape and incest numbers, we are still left with the fact that about 9 out of 10 abortions are, in fact, elective procedures performed out of convenience. And remember, that elective procedure is the willful termination of another human life.

If I saw a pack of nuns crossing the street and chose to run over them with a steamroller, I doubt very much that most police would allow me to get to the ninth one before arresting me for murder.

In 2020, 3797 abortions were reportedly performed in Oklahoma. Statewide lockdowns from the COVID-19 pandemic pushed that number down from 4424 in 2019. But the Baby Death Cult is working hard to bring those numbers back up and to record heights with the opening of the state’s third Planned Parenthood clinic in Tulsa earlier this year. Tulsa now has two fully operational abortion mills, versus one in Oklahoma City. Clearly, Planned Parenthood sees Green Country as its money market over Bricktown.

People who plea for universal healthcare, masks in schools, mandatory vaccines, etc. but do not also respect the health of unborn babies do not have an argument. They have an agenda. People who believe that “black lives matter” but do nothing to protect the black babies’ lives do not have principles. They have politics. People who claim concern for Afghan women’s rights—or any women’s rights—but do nothing to protect unborn women’s rights do not value human equality. They enable human extermination. And at that point, it really does not matter whether they murder other people in a sterile operating room or by pouring gasoline on a daycare and lighting it during a Tuesday’s snack time.

It is time for Oklahomans to get honest about their values. It is time for everyone to acknowledge which side of this issue they are allied with and to own that decision. And for those who believe that freedom and life are truly virtuous, it is time to support leaders and legislation that stands against the Baby Death Cult.

SB 584, authored by Oklahoma State Senators Nathan Dahm (District  33) and Jim Olsen (District 2), was signed into effect in April of this year. Governor Kevin Stitt’s pen stroke cut off the flow of state funds or money from any political subdivision to Planned Parenthood or its affiliates.

SB 612, also written by Dahm and Olsen, has yet to clear both chambers as of the time this article was written. If passed, this law would make it illegal to perform an abortion in the state of Oklahoma except under specific circumstances, such as medical intervention where the mother’s life is in danger.

And to add teeth to these laws, SB 723—another Dahm/Olsen work—not only prohibits abortion upon detection of a fetal heartbeat, but also penalizes death-dealing doctors who perform procedures thereafter. If we cannot appeal to the Baby Death Cult’s humanity then maybe the loss of their licenses would finally make infanticide unprofitable in the state of Oklahoma.

This is a matter of life and death. Every workday, the Baby Death Cult claims 16 more Oklahoman lives. Oklahomans need to make their choice, do their part, and own the consequences. 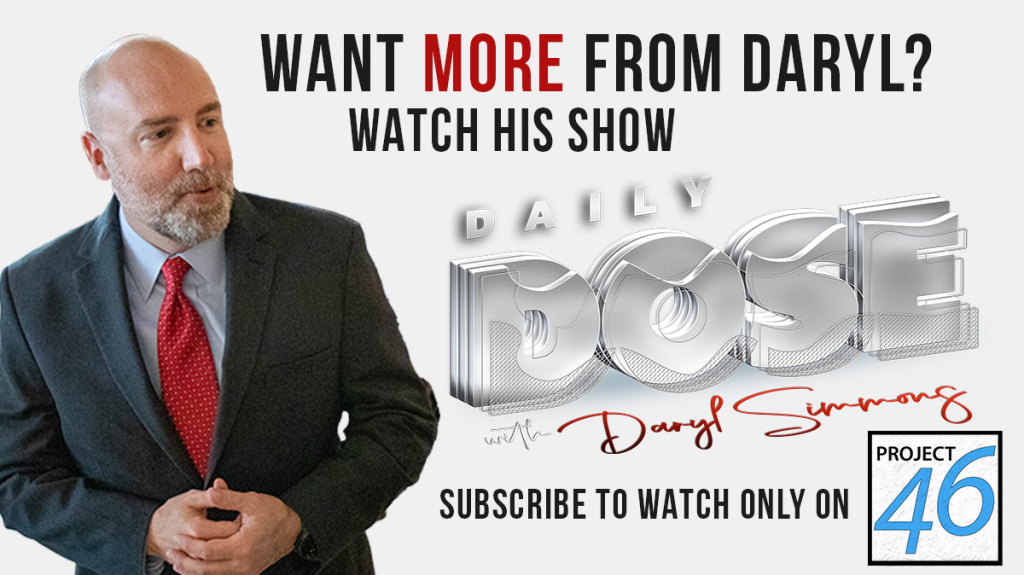 Project Forty-Six is Oklahoma’s fastest growing digital-platform for conservatives. We are dedicated to providing you with both printed and video content on the issues that matter most. Stay informed and get access to exclusive content by becoming a subscriber. 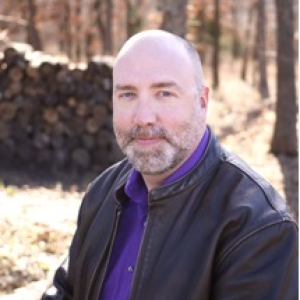 Daryl E.J. Simmons is a news analyst, commentator, and staff writer for RedRiverTV. An alumnus of the University of Tulsa, Mr. Simmons is a former intelligence professional and popular novelist who has served as a policy advisor to local, state, and world leaders.
See More »
PrevPreviousI’m Going to Miss the NRA
NextAnother Variant…Another ReactionNext